Discussions of the application of digital to democracy tend to get bogged down quite quickly in the (limited) merits and (extensive) risks of online voting. A more promising approach is to look at ways in which digital technologies can support and amplify democratic processes, more to do with deliberation and engagement than with quantification. This is still new territory, so experimental approaches still make good sense, but as this post brings out, there are now enough of those experiments around the world to start to group them and to see common opportunities and challenges.

‘Start with user needs’ has been the mantra of digital government since the early heady days of GDS. It’s a thought which is simple, powerful and – this post argues – wrong. Or, more accurately, unhelpful: it’s a concept which both lacks precision in its own right and risks being too tightly coupled to the construction of solutions.

This is not some random hit job, but a deeply reflective post which brings out clearly where user research most adds value, by being still clearer about where it doesn’t. In doing so it draws out a point which is relevant and important to a much wider audience. It positions user research as a means of reducing risk – and that is important not just as a way of helping senior decision makers see the value in it, but because basing decisions on unexamined and untested assumptions leads to bad consequences (and has been doing since long before government was digital).

Debates about personal data have a tendency to be more circular than they are productive. There is – it appears – a tension between individual privacy and control and the power unlocked by mass data collection and analysis. But because the current balance (or imbalance) between the two is largely an emergent property of the system, there is no reason to think that things have to be the way they are just because that is the way they are.

Given, though, that we are where we are, there are two basic approaches to doing something about it. One is essentially to accept the current system but to put controls of various kinds over it to ameliorate the most negative features – GDPR is the most prominent recent example, which also illustrates that different political systems will put the balance point in very different places. The other approach is to look more fundamentally at the underlying model and ask what different pattern of benefits might come from a more radically different approach. That’s what this post does, systematically coming up with what will look to many like a more attractive set of answers.

Mydex has been building practical systems based on these principles for a good while, so the post is based on solid experience. But therein lies the problem. Getting off the current path onto a different one is in part a technical and architectural one, but it is even more a social, political and economic one. As ever, the hard bit is not describing a better future, but working out how to get there from here.

Everybody is in favour of evidence-based policy – by definition it must be far superior to the policy-based evidence with which it is often contrasted. This post is a brave challenge to the assertion that there is an evidence base for evidence-based policy. In particular, it argues first that weak evidence can be unwittingly assembled to appear misleadingly strong and in doing so close down policy options which should at the very least be kept open; and secondly that experimentation is a better approach, precisely because it avoids forcing complex issues into simple binary choices.

That’s not an argument that evidence is unimportant, of course. But it’s a good reminder that evidence should be scrutinised and that simple conclusions can often be simplistic.

This is the recording of an event at the Institute for Government this week, in which Jamie Susskind starts by briefly introducing the arguments of his book, Future Politics, and then discusses them with Gavin Freeguard – and as the book weighs in at over 500 pages, this might be a gentler way in. Susskind approaches the question of the title from the perspective of politics and law, coming back to the question, how much democracy is the right amount? That’s a harder – and more important – question than it first appears. Answers to it have been evolving for several thousand years, but digital technology gives it a new urgency, for reasons which range from the manipulative power of social media, the elimination of leeway, to bot-driven perpetual voting.

In the last century the fundamental question was, what should be done by the state and what should be left to the market and to civil society? … In our time, the key question will be this, to what extent should our lives be governed by powerful digital systems, and on what terms?

Dan Hill – But what was the question? 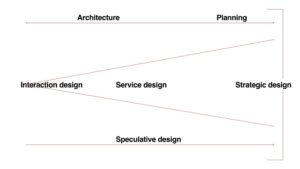 This is quite a demanding essay. It demands some time to read, at about 6,000 words, and it demands more time to reflect, not least because it is subtly challenging. How do we design our interaction with our urban environment in a world of new technologies? How do we balance optimisation for individuals against optimisation of wider systems? How, more broadly, do we ensure that social objectives drive the adoption and deployment of technology rather than being driven by them? Or to step back from the detail (and in some ways from the specific subject), there’s a pretty strong consensus on what user centred design means for individuals; much less so on what it might mean for groups of people whose lives and activities intersect and affect one another.

There are clear examples of what new approaches to design might look like and of how they have been applied. But there isn’t much here about the social and political approaches which create the space for those design approaches to flourish. It’s unfair to criticise this essay for not doing something which it makes no claim to do, but the concept of ‘strategic design’ it introduces perhaps has a further level still.

It should by now be beyond obvious that technology is never just about the technology, but somehow the hype is always with us. This article is a useful counter, listing and briefly explaining seven reasons why autonomous vehicles may not happen and may not be an altogether good thing if they do.

It’s worth reading not only – perhaps even not mainly – for its specific insights as for its method: thinking about the sociology and economics of technology may give more useful insights than thinking just about the technology itself.

This short post is more of an aside than a developed argument, but from this source it’s not surprising that even an aside contains a couple of memorable and provocative thoughts.

The first is an expansion of the title, which nicely echoes Emily Tulloh’s recent post:

The second part of the post turns to the temptations and risks of being a leader in a hierachy: