Counting things is boring and costs time and money which could be better spent on something less boring.

Having counted things – particularly having counted them for a long time – provides incalculable value in understanding what has been done and what might be done.

If you need a fifty year data series, you need collection to have started fifty years ago – starting now will do you no good at all (though it might cause your memory to be blessed half a century on).

It is of course easy to tell what we wish our predecessors of fifty (or ten, or five) years ago had done, rather less easy for them to know that then (or for us to know that for our successors now). That is in a way just a specialised version of a much more general problem of long term public investment, where there is a respectable argument that in undervaluing long term benefits, we end up with fewer long term assets being created than would be optimal – which applies as much, and perhaps more obviously, to investment in physical infrastructure

New leaders rarely lack for advice on what their priorities should be and how they should approach them. This is a classic of its kind, well argued, well evidenced, addressing important issues – and yet  missing something important in the gap between diagnosis and prescription.

The basic premise is that a political crisis should prompt a new prime minster to embrace structural reform of government, rather than to avoid or postpone it. That is almost certainly a forlorn hope – the capacity for reform of this kind is probably most available when the apparent need is least pressing – but that shouldn’t stop us reflecting on the merits of the ideas.

Many of the specific ideas put forward are sensible and serious, though there is a tendency to see centralisation and top down control as self-evidently ways of making things better. But the overall argument is undermined by missing out two big issues, both prompted by taking more of a systems perspective to the problem, which together point to the need for a theory of change to shape understanding of how real system improvement could be achieved.

The first is prompted by Stafford Beer’s aphorism, “the purpose of a system is what it does”. Observing that some aspects of the current do not work well and identifying alternatives which look as though they might work better is relatively easy. But it’s a safe assumption that nobody intended or wanted the system to work badly – the myth of civil service obstructiveness is exactly that – so to the extent that it does, understanding why the current system is as it is, and therefore whether different approaches would deliver different outcomes is less straightforward.

Government as a Platform is a phrase coined by Tim O’Reilly in 2011 and defined and redefined by all sorts of people, organisations and governments ever since. This post offers a whistle stop tour of about 20 definitions and descriptions before condensing them all into one:

Reorganizing the work of government around a network of shared APIs and components, open-standards and canonical datasets, so that civil servants, businesses and others can deliver radically better services to the public, more safely, efficiently and accountably.

There’s a lot of concise power in that and if the intention is to focus primarily on the platform, it works pretty well. But if the intention is to focus more on the government, it has two pretty serious drawbacks. One is that it makes the surprisingly common assumption that government is about service delivery, overlooking all the things which governments do which are not that and underplaying the place of government in a wider political system. The other is that ‘accountably’ is having to carry a very heavy weight: it is presented as ‘the equal’ of safety and efficiency, but only in relation to the provision of better services. That really matters, of course, but it is a long way from being the only thing that matters for the governments of 21st century democracies. But all that also illustrates, of course, the strength of this approach – by setting out assumptions and approaches so clearly, it becomes possible to have the debate in the right place.

Being understood is not a precondition to being useful. The history of medicine is a history over centuries and millennia of spotting efficacy without the least understanding of the mechanisms by which that efficacy is achieved. Nor is that limited to pre-scientific times. There are still drugs which are  prescribed because they work, without any understanding of how they work.

Zittrain calls that intellectual debt (by unspoken analogy with technical debt), where theoretical understanding lags behind pragmatic effectiveness. The problem is not that it exists, as the medical examples show, it is that machine learning takes it to a new level, that our understanding of links between cause and effect come to have more to do with association than with explanation. For any single  problem, that may be no bad thing: it can be more important for the connections to be accurate than to be understood. But the cumulative effect of the mounting intellectual debt has the potential to be rather less benign.

A simple list of a dozen points about how to do better strategy making, from somebody with real insight and experience. They won’t all be right in every context, but they are all worth thinking about – to be treated more as provocations than as prescriptions. There’s also a plug for Good Strategy, Bad Strategy, which is an excellene book, though its ideas are even better expressed in the shorter, sharper article version 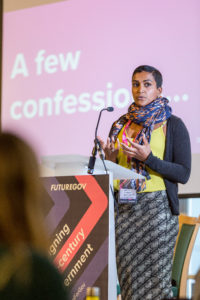 These are the slides (and speaker notes) from an exceptionally powerful presentatation about diversity and inclusion given at FutureGov’s recent Designing 21st Century Government event – though alas without the energy and power brought to them on the day.

At the core of the argument is a challenge not to deny or elide bias, but to recognise and address it through five stages:

The fourth is in some ways the most powerful: inclusion is not a reduction to a faint common denominator, it is a respectful integration of perspectives and challenges. Simple disagreement is easy and unproductive. Disagreeing well is how good ideas generate better ones. 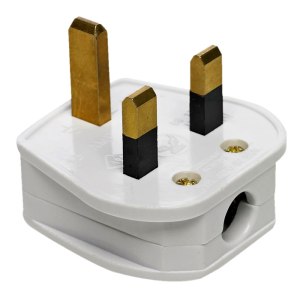 The value and importance of data standards are explained by analogy with the value and importance of electrical standards. It’s a good choice – the analogy works well even at its simplest level, but is also a good way in to some of the complexities which lie not far below the surface. And the post asks by subtle implication – though understandably without answering – how standards are set for the setting of standards.

We like to think of ourselves as rational decision makers, using patterns of evidence to discern meaning and to understand and shape our environment. The case made in this video is that that is at best a half truth. The reality is that our powers of explanation are much weaker than we tend to recognise or care to admit and that in looking for patterns we are too ready to overlook random variation.

That’s not just an abstract or theoretical concern: the crisis of replication in science is a real and alarming symptom of the problem; the challenge to the very concept of statistical significance is closely related.

This video is a thirty minute summary by Michael Blastland of the ideas in his recent book, followed by a discussion with Matthew Taylor which is also well worth watching. That’s a rather bland description of a talk which was anything but – these are challenging ideas, powerfully presented, which anybody who creates or uses evidence for public policy needs to understand.

This post – and the app it is about – stands as a kind of metaphor for digital public services much more widely. The app has a mostly slick front end, with a visual design which is both distinctively of the NHS and a clear descendant of the earlier work of GDS. But it sits on top of chaos which it can obscure only to a limited extent. It is a front end veneer for different systems, supporting different sets of functions and so fundamentally is not in control of its own user experience.

The post does a good job of explaining why that is and why, despite that, there is still value in the app. There is a circle which needs to be virtuous where a well-designed front end and a growing user base both demonstrate and create value to GP practices in improving their systems which in turn stimulates adoption and use by patients. But there is a risk that the circle turns vicious, that the expectations set by the modernity of the immediate user is undermined by the clunkiness of what lies behind. The good needs to drive out the bad, but the bad will not give in easily.

Speaking truth to power is often talked about as though it is a heroic endeavour, a point of challenge and catharsis, a showdown when either the message is heard or the messenger is shot. And of course if the norm is that power does not hear truth, none of that is surprising. But perhaps the more interesting approach is to ask why that is assumed to be the norm, and what might change it.

This post doesn’t – and couldn’t – answer that question, but it does shed some interesting light on it. If what is actually at issue is as much or more competing belief systems rather than competing realities, then solutions can’t be about piling up more facts, but might have to do with building relationships in a different way. The difficult bit in that, of course, is not the speaking of truth to power. That just takes bravery. The difficult bit is creating the conditions for power to listen, and that takes a much broader set of skills and approaches.

But as the post hints at, it would be better still to reverse the question. The real challenge is for leaders to show more clearly that they want to listen, not for courtiers to have to balance honesty and self-preservation.