Complex systems thinking is being used for policymaking. Is it the future?

Metaphors evolve. The fashion for mechanical metaphors to explain social phenomena is no longer as dominant as it once was (though such metaphors are still often lurking a little below the surface); the fashion for more organic metaphors is in the ascendant. Systems thinking generally and complex systems more particularly fit nicely with that trend. So it’s worth pausing to ask ourselves whether talking more about complex systems in the context of politics and policy making is merely following fashion or is getting closer to some underlying reality. Or to put that slightly differently, are complex systems an interesting metaphor for social and political systems or an accurate encapsulation of them?

This post gives some helpful pointers to answering that question, without quite actually answering it. Coincidentally, a Gordian knot-cutting tweet pops up from David Henig:

If a problem seems to be simple to solve, yet hasn’t been over many years, it’s probably complex.

One of the subheadings in the post asks ‘Is it really a new approach?’ The answer to that is clearly ‘no’ – the basic ideas have been known about in government for a long time. It’s tempting to get a bit recursive at that point: the reason why complex systems approaches have not become more deeply rooted in social and political change is itself an interesting complex systems problem.

Universal Laws of the World

Rules of thumb are useful things; partly because they avoid the need for original thought on every occasion and partly because they can help avoid the risk of being over persuaded by one’s own arguments. This modestly titled post is a slightly random collection of laws, some more rigorous than others, some more widely familiar. No 5 is new to me but seems to encapsulate something important, which could be expressed even more pithily as ‘all change is irreversible. And No 11 is one which people with tendencies to strategic abstraction should chant ritually whenever they come together.

(found through Ian Leslie’s gloriously eclectic newsletter, which is always packed with gems)

‘The point about the digital transformation of government,’ the authors observe, ‘is that digital transformation isn’t the point.’ That apparently trite thought both unlocks some very important questions and also forces confrontation with the fact that some of those questions are very hard – which is perhaps why they have so often been wished away. It doesn’t help that ‘digital’ is used by many as a synonym for ‘technological’, so creating near limitless opportunities for mutual confusion. This article attempts to defuse that confusion by identifying four broad drivers of change, only one of which is directly about technology. It will perhaps be a mark of progress when we can get beyond calling the result digital transformation at all.

But once past that, this is a serious and important attempt to understand how governments – both the ones we have, and the ones they might become – are responding to changes in the environment in which they operate. Government is about service design, but it is also about democracy and engagement, about visibility and legitimacy. Too many technologists don’t understand how government works; too many people in government don’t understand what technology could and should be doing for them and for the people they serve – and both groups too often fail to realise that hard boundaries between them are themselves part of the problem.

The article is a teaser for the authors’ new book, Are we there yet? (spoiler: no). Its focus is on Australia, but that shouldn’t discourage readers from elsewhere, who will see issues they recognise and will have much to gain from the understanding and insight with which they are discussed.

Government as a Platform

Richard Pope posted a series of tweets linking to all the outputs from his time as a fellow at the Harvard Kennedy School of Government. It’s some of the most sustained thinking and writing on digital government by somebody deeply involved in doing it there is, so since tweets sit at the curious intersection of the ephemeral and the permanent, it seemed worth bringing it all together. What follow are lightly edited versions of those tweets.

Government as a Platform Playbook

In part based on interviews with people from digital service groups around the world. Aims to provides teams building platforms in government with actionable guidance.

Government as a Platform – the hard problems

These are mostly bigger political/policy questions that need political capital to resolve.

Part 3 – Shared components, APIs and the machinery of government

3. Service standards and other technical standards (and a short article explaining the rationale)

Government as a platform reading list and various other resources

The case for a design archive for digital services

The narrative around “data-sharing” in government needs resetting

Street lighting in suburban London: a parable for digital government

Interview with Will Myddelton – UK Government as a Platform programme

A working definition of Government as a Platform

When U.S. air force discovered the flaw of averages

The failure of product and service design to reflect human variety has been made more visible by work such as Caroline Criado Perez’s Invisible Women and Joy Buolamwini’s work on racist algorithms. Those are important and very necessary perspectives, but in a way they are both special cases of a much more general problem. There is a bad assumption implicit in many of the choices and decisions they and others write about that the average person is a white, middle class, middle aged male. But one of the reasons it is possible to fall into the trap of making that assumption is the more fundamental assumption that it is useful to think in terms of averages in the first place.

This article is a few years old, but it holds up well as a challenge to that assumption, in two important ways. The first and more straightforward is the demonstration that across more than a tiny handful of characteristics, nobody is average for all (or even most) of them. It follows that designing for the average is designing for nobody, not designing for everybody.

The second is that even then, facts are not neutral. There’s a good response to that evidence, which is that pretty much everything has to be to designed in a way which fits systems to individuals, not individuals to systems. But there is also a bad response, which is that if people fail to be average, they should work to remedy their deficiencies. And to complete the circle, it’s probably not altogether a coincidence that the example illustrating the first response is about men, and the example illustrating the second is about women.

Transformation is not a programme 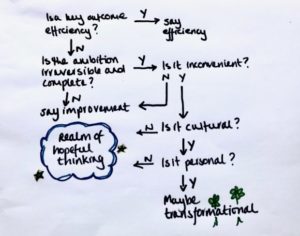 Transformation is one of those words which sounds good, without actually tying you down to meaning anything in particular. It sounds more daring than innovation, more glamorous than project management – and it’s got more syllables than change.

This useful post presents a view of transformation through six principles which together make it clear that it is fundamentally cultural in nature, and is only what is left once other kinds of change have been accounted for. And there is an interesting parallel between these ideas and Paul Taylor’s similar sense that transformation is too vague and self-serving a term to be useful, which he then addresses through a series of design principles.

Culture is our strategy

Delivery is hard. Delivering consistently and with high quality is harder. Sustaining that over time without damage to individuals, teams and the wider organisation is very hard indeed.

In the short run it is often possible to over deliver, but there is a price to be paid. Getting that right is not, of course, about organisational structures or project plans, it is about people and the shared culture of their working environment – or about ‘trying hard to strike a balance between delivery now, and delivery tomorrow’.

This post approaches that question from the perspective of recognising and nurturing culture. But there is also a strong parallel with the concept of organisational debt (itself derived from technical debt), the recognition that failing to keep the organisation’s structures and processes in line both with its changing internal needs and with its external environment stores up problems which might be avoidable for a time, but cannot be avoided indefinitely. Or to put it differently again, culture as strategy is one of the ways in which teams and organisations can better manage strategic drift.