A measure of value for digital public service delivery 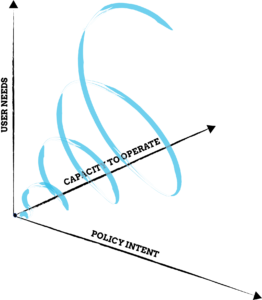 The quest for a measure of value of digital public services has been running pretty much as long as the quest for valuable public services. Many attempts have been made to pin down the measure, but often with rather lop-sided results. With characteristic elegance, Richard Pope has distilled it all to three factors – and critically makes the point that they need to be balanced against each other. My one quibble with the three he has chosen would be to suggest that ‘capabilty to operate’ needs to be understood more broadly than his brief definition implies. It is the service – in all its aspects which needs to operated, not just the digital team constructing the technical components. But with that broader interpretation of the third axis, this is a useful tool for framing – and addressing – a perenially important question.