Predicting the tides based on purposefully false models 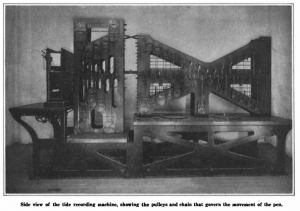 As a neat little example of the general proposition that all models are wrong, but some are useful, David Weinberger unearths a mechanical tide prediction engine from 1914, which refined the accuracy of its forecasts by using an increasingly unrealistic model of the solar system, with planets and moons being invented with gay abandon to make the results come out right. That’s a beautiful example of one of the points Weinberger is making in his article about machines, knowledge and artificial intelligence – that there will be complex consequences of systems which increasingly appear to have useful outputs without it being easy – or even possible – to work out how they were derived.