How Britain voted at the 2017 general election 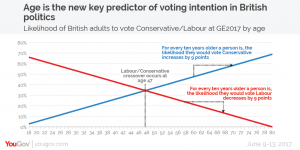 An interesting analysis of voting patterns in the general election, drawn from a post-election survey with a very large sample size, so should be pretty robust. Age emerges as the strong divider, though with the potential impact strongly damped by differential turnout – leaving as perhaps the key question the relative importance of the age effect and the cohort effect. The movement there is stark: at the beginning of the campaign, the pivotal age above which support was more likely for the Conservatives was 34. By the end of the campaign it was 47.