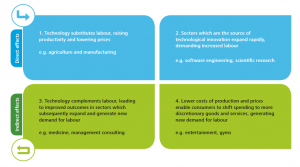 The impact of technology on employment often focuses on the jobs at risk of being automated out of existence, not at the ones which might be created, either because of new technical possibilities, or as a consequence of increasing wealth and disposable income. This research looks at how patterns of employment have changed by tracking census data on occupations from 1871 to 2011 and concludes, not altogether surprisingly that their distribution has steadily changed, with patterns ranging from a steady decline in agricultural labourers and launderers, to telephonists rising to a peak in 1971 before declining by 2011 to the level of 1911 – and accountants, hairdressers and bar staff showing relentless growth, which is either the triumph of the service economy or an alarming step towards the reality of the B Ark.

Critically though, the conclusions are that although technological unemployment is very real, the stock of employment is not fixed or limited by technology, and that there is every reason to expect that new – and often unforeseen – jobs will continue to be created, as they always have been.

Link to the full report below – there was also a good summary of it published in the Guardian.