The first part is a typology of government interventions (click on the image for a larger and more legible version), which prompts more rigorous thought about the nature of the design challenge in relation to the nature of the intended impact.

Slightly curiously, the vertical categories are described as being on a scale from ‘Low level intervention’ (stewardship) to ‘Large scale intervention’ (legislation). That’s a little simplistic. Some legislation is intended to have a very narrow effect; some attempts to influence – which look as though they belong in the ‘leader’ line – can have huge effects. But that’s a minor quibble, particularly as it is described as being still work in progress. 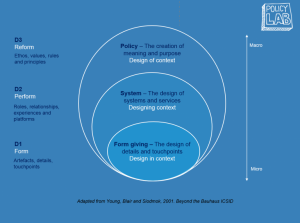 The second dimension is about the scale of design, from micro to macro. Thinking about it that way has the rather helpful effect of cutting off what has become a rather sterile debate about the place of service design in government. Service design is, of course, critically important, but it’s a dimension of a wider model of policy and design which doesn’t entail conflict between the layers.