How To Become A Disobedient Organisation 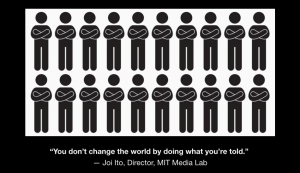 Rules are made to be broken. That’s an idea with considerable support from those on the receiving end of rules, rather less so from those who set them. Rules are the very essence of the Weberian bureaucracy which infuses governments and there are good reasons – fairness, clarity, consistency – why that is so. But that also means that bureaucratic organisations are designed to frustrate evolution and thus innovation – which is perhaps one reason why bureaucracies rarely communicate a sense of being on the cutting edge of innovation.  And while bureaucracy is often used as a pejorative synonym for government, in this sense almost all organisations of any size are bureaucracies. Becoming adaptable and responsive isn’t just about breaking rules, it’s about adopting the expectation that rules are made to be broken.