What do we mean when we talk about services? 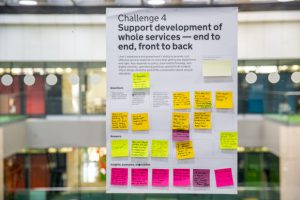 A service is not an interaction on a website; it is not an immediate transaction. A service has a beginning, a middle and an end. The problem is that the service designer is at risk of only seeing the middle, and while a well designed middle is a good thing, it is not the whole thing. From the point of view of the person who has a need they want to resolve, the starting point may come much earlier and the resolution much later.

So it’s very encouraging to see GDS recognising this and making it clear that service design should be seen broadly, not narrowly. There’s room for debate about where the lines are drawn from the supply side perspective (the difference between ‘supporting content’ and ‘things which support’ is lost on me, for example) and perhaps more significantly a definition of a user journey which is too producer focused. But the underlying approach is very much the right one.