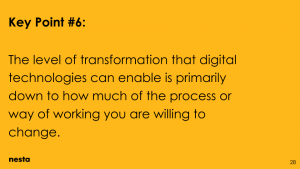 This simple and powerful set of slides does an extraordinarily good job of summarising the key issues in digital transformation, not least in being really clear about the extent to which all of this is a technology issue (not as much as it looks) as opposed to an everything else issue (much more than it first appears). The section on ‘deciding how you want to work’ gets twice as many slides as ‘thinking about your technology needs’, which is a pretty strong indicator of the approach being taken.

It’s certainly possible to challenge some of the details. The arresting assertion that ‘we can broadly take for granted that technology can do whatever we want it to do’ perhaps has more power than precision – though the slightly lesser claim the technology needed to support government processes already exists is indeed a useful reminder that appeals for technological exceptionalism are very likely to be misguided. The insistence that agile projects can’t succeed in organisations which retain traditional approaches to funding and governance is both wrong and unhelpful: wrong because there are plenty of example of where it has succeeded, and unhelpful because every organisation has to start somewhere, and if agile can’t work at all unless everything is agile, there is effectively no way of making that start.

Overall, though, the strengths far outweigh the weaknesses – and this is a beautiful example of doing the hard work to make things simple. As a further bonus, the slides are open for comments, and have already sprouted a rich set of observations from Matthew Cain.