Digital Transformation at Scale – a review 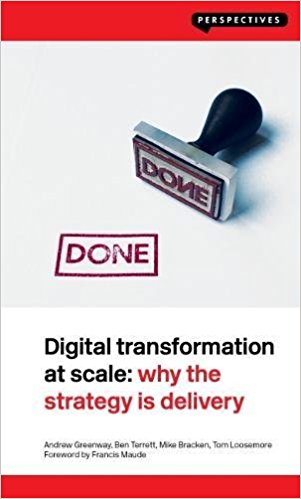 It’s probably not news to most readers that some of the leading creators of the Government Digital Service have written a book. Many have been swift to observe the apparent irony that the book in question has been published only on paper, with no digital version available. That’s a fairly major obstacle fort those of us with a strong preference for the latter.

But now an alternative solution presents itself, in the form of a thorough and balanced review by Matthew Cain. The creation of GDS by Mike Bracken and his team was an enormous achievement and, despite its detractors, much good continues to be done there well after the first generation of pioneers moved on. But the founders’ vision was a narrower one than they ever quite acknowledged and the government context in which they found themselves was more unusual than they realised – or as Matthew puts it, ‘The section on political sponsorship basically tells readers to have a political sponsor called Francis Maude.’

The publisher have helpfully made contact to share the good news that the book is now available on kindle, and apparently is due to appear in other formats. But that leaves unanswered the perennial mystery of why publishers find it so much harder to produce electrons than paper.