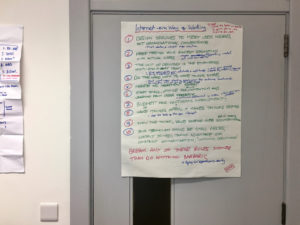 This is a deceptively simple list which describes ways of working in internet-era organisations. The GDS design principles are clearly among its antecedents, but this is a broader and deeper approach, setting out how to make things work – and work well – in organisations. It’s hard to argue with the thrust of the advice given here, and in any case it ends with an admonition to do sensible things in the right way rather than stick rigidly to the rules.

That doesn’t make the approach beyond criticism, both in detail and in approach, though it does have the happy consequence that challenge and consequent improvement are themselves part of the model being advocated. With that starting point, there are a couple of places where a further iteration could improve things further.

One is the instruction to treat data as infrastructure. The thought behind that is a good one: data matters, and it matters that it is managed well. Well ordered data is part of infrastructure at every level from the national (and international) downwards. But data is also part of the superstructure. Managing, processing, and creating value out of data are fundamental to the purpose and activities of organisations. Both aspects need to be understood and integrated.

A more subtle issue is that while it might be clear what counts as good internet-era ways of working, much of that work happens in organisations which are barely of the internet era at all. Precisely because it does challenge established approaches, established power structures and established infrastructure of every kind, the path to adoption is far from straightforward. Looked at in that light, this list is oddly impersonal: it is couched in the imperative, but without being clear who the orders are addressed to. There is a dimension of behavioural and organisational change which never quite makes it to the centre of the narrative, but which for organisations which are not native to the internet era is critically important.

None of that is a reason for not following the advice given here. But some of it might be part of the explanation of why it needs to be given in the first place.