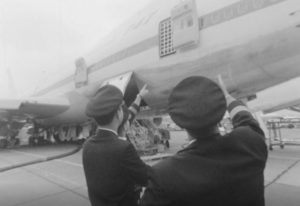 Fifty year old documentaries are not the staple of Strategic Reading, but this one is an intriguing insight into thinking about the future – a future which has of course become our past and present. It was made just a few months before the Boeing 747 went into service: the physical plane was very real, the implications for wider service design were very uncertain.

There’s an intriguing clip early on where the head of the Royal Aircraft Establishment observes that over the then half century of passenger flight, planes had doubled in size every ten years. The 747 fits that trend perfectly. Extrapolating to the next century, muses the Director, that would imply planes carrying 10,000 people. And you can hear in his voice both confidence in the trend and doubt about its implications, battling for dominance.

Half a century on, we know that it was right to doubt – the 747 was in some important ways on the inflection point of the growth curve. Planes haven’t got faster or higher or more comfortable since then, and they haven’t, with the brief and apparently aberrant exception of the Airbus 380, got any bigger.

That brings Herb Steins’ great line to mind, ‘If something cannot go on for ever, then it won’t’, and that in turn is an important reminder that in thinking about the future, it is unwise to assume that exponential change is unconstrained and indefinite.

Meanwhile, stay with the documentary to stumble across the world’s only vertical take off passenger plane, developed at the same time as the 747, but never quite attaining the same dominance of the skies.