A Manifesto for Better Government 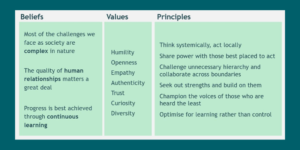 This in some ways a follow up to Adrian Brown’s previous post, but it stands firmly on its own merits doing exactly what the title suggests. It starts with three beliefs, derives seven values from them, and from that combination asserts six principles for action. There’s room for debate about whether these are precisely the right three, seven or six – and that would be a very good debate to have, while at the same time rather missing the point.

Dominant metaphors change over time – often quite a long time. For a century or more, the machine, and more recently the computer, have been the dominant metaphor for systems and organisations, and even for people. That metaphor has not been unchallenged of course – the agile manifesto, of which this is a no doubt conscious echo – can be seen as an attempt to do exactly that. This manifesto is based much more on networks and relationships and, crucially, a view of knowledge which places rich understanding at the periphery of the organisation, closest to its external signals, rather than at its heart. A system operating on those lines would be both more resilient and more responsive and there is much which is highly attractive in the manifesto.

It does not address the perennial hard question of political organisational change. It is easy – relatively – to have a vision of a better future. It is much harder to work out how to get there from here. But that should be taken not as a criticism, but as an important challenge to everybody interested in better government.