The path from crisis 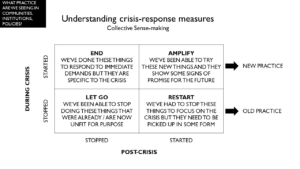 It is easy, but not in the end very productive, to worry about how we got into a crisis and to pin the blame as we choose. It is harder, and very much more productive, to look at what the crisis has forced us to do and to ask how we can discard that which was of only short term utility while keeping and developing that which shows promise of longer term value.

This post provides a really useful framework not just for thinking about the difference between what we have needed to do in the crisis and what we may be able to do beyond it – neatly summarised in the matrix. But it goes beyond that to reflect on what is capable of making potentially radical change more robustly sustainable. The answers to that come not just in institutional change and adaptation, important though those opportunities are, but also from an approach to public engagement and participation which has the potential to provide the foundations necessary for better decision making more generally.

Could the crisis be a turning point, rekindling our belief in progress? It has reminded us that it is not hope that leads to action as much as action that leads to hope. It has underlined our common humanity while encouraging us to empathise with our less protected and advantaged fellow citizens. It has, I sense, made us intolerant of the unreason and cynicism that underlies so much populist rhetoric. […]

The crisis is forcing us to think differently and to act differently. Perhaps the most profound shift would be if we were ready for a different kind of leadership.

How to Make Better Decisions About Coronavirus

It’s generally far easier to make decisions badly than to make them well, even at the best of times. Knowing that is the first step towards countering it, and this post gives a pretty standard account of a range of cognitive biases which may be relevant in the context of COVID-19.

Nine biases are covered in the post, some more obviously of particular relevance to present circumstances than others. The last two are perhaps most pertinent. Neglect of probability is essentially the same point made in Scott Alexander’s much more detailed argument, that structuring thinking in terms of probabilities is harder than the attractive simplicity of binary choices. And perhaps the most challenging of all, normalcy bias. What is normal is a really useful guide to what is to come, until it isn’t. There is a lot of rhetoric around at present about things not going back to the way things were and about the need for and desirability of a new normal. But we have seen from other crises that the sense of what is normal, the sense of there being a natural order of things (often reinforced, as it happens, by a poor grasp of probability) can too easily overwhelm the sense of opportunity and possibility which the crisis itself has created. Normalcy bias is part of what made the crisis what it is, but it is also part of how we will manage the aftermath, with the risk of becoming part of why fewer lessons will have been learned and applied when we come to look back at this period in the years to come.