Introducing a ‘Government as a System’ toolkit 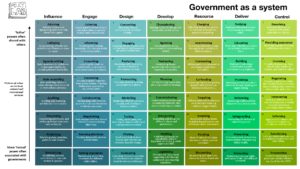 It’s been fascinating to watch the iterative development of Policy Lab’s synthesis of how governments get things done. It has now mutated into something bigger and more ambitious, nothing less than a toolkit for developing and managing government as a system

Its centrepiece is a grid of 56 actions, mapped by approach to power and by position in the design cycle, There’s a huge amount of thought and experience baked into it, giving the potential to be a really valuable tool for framing issues in systems thinking terms. 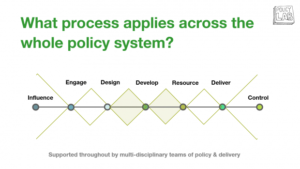 From that perspective, there may be almost equal value in a second diagram, which expands the double diamond model into a chain of gems which map to the columns of the action grid.

But it’s important to recognise what this isn’t as well as what it is. It is a toolkit which is helpful in thinking about government as a system, it is not itself a depiction of that system. The grid is not a map, as the post at one point implies; rather it is a key to system maps as yet largely undrawn. An atlas of those maps, of various scales, complexity and precision would be a thing of wonder, but it is not an atlas we yet have – or probably could ever have, bringing to mind as it does Borges’ one paragraph short story, On Exactitude in Science. That’s not to diminish the power of the key and the approach, but it does very much reinforce the point that this is a toolkit, not a solution.

It will more interesting still to see where this might go next. This version is government as a system. The direction of travel points to a view which will increasingly be more about government in a system.

One thought on “Introducing a ‘Government as a System’ toolkit”