This article will inform and irritate, with the balance between the two being a matter of individual taste. It’s good of its kind, but its kind is putting organisations to right through the perspective of high consultancy, and nobody does it higher than McKinsey. It is taken as a self-evident truth that

Few of us get around without the help of ridesharing and navigation apps such as Lyft and Waze. On vacation, novel marine-transport apps enable us to hitch a ride from local boat owners to reach an island.

The few of us who survive without novel marine-transport apps may find that veering on self-parody – or perhaps being unintentionally precise about who is intended to be encompassed by ‘us’ – but it is worth persisting. The five pitfalls which the article describes do cover some useful ground and there is recognition that different circumstances demand different responses. 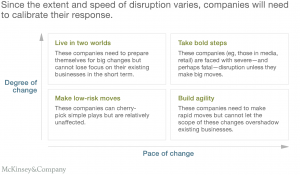 But as we have seen in other contexts, there is a sense of breathlessness about the word ‘digital’ itself. Their definition isn’t a bad one, ‘the nearly instant, free, and flawless ability to connect people, devices, and physical objects anywhere,’ but the more the article goes one, the less adequate it seems in relation to the scope of what is being asserted for it. In the end, ‘digital’ becomes irrelevant – this is about strategy in the broadest and deepest organisational sense.

One telling point is the use of Tesla as an example of the power of first mover advantage. While it’s clear that they do have real advantages in electric power, it’s also increasingly clear that they have failed to establish such an advantage in autonomous driving and failed even to reach incumbent standards of vehicle mass manufacturing. Where that leaves its overall strategic position has still to play out, but it is far from clear that it is less vulnerable to incumbents than they are to it. In a very concrete sense, there is more to strategy than digital.