There is an almost universal belief, no less strong for being almost as universally unspoken, that the UK political system is an exemplar of stability and moderation. There is a related belief, near universal among those most affected by it, that being a non-political civil servant is unproblematic, precisely because of those characteristics of the wider political system.

Those beliefs have been pretty resistant to evidence. Reflections on civil service ethics generate little interest. The remarkable resignation letter of a British diplomat in the USA cracked the facade, but the crack is already healing. This post takes that resignation as its starting point for a deeper examination of the fragility of civil society. It is short and pointed; alarmed but not alarmist. It sets a challenge. It is not clear where an effective response to that challenge will come from.

Imagine we could re-design democracy from scratch? What would it look like?

People who work in the Whitehall tradition of government tend to think of democracy as a mildly intriguing thing which happens somewhere else. That’s an approach which has pretty severe weaknesses even in its own terms, but becomes markedly more significant in a world where the alignment of political divisions with electoral structures is severely weakened. So thinking about democracy not as some distinct feature, but as an integral characteristic of the polity is both counter-cultural and essential.

This post is an important challenge to that complacency, part of an emerging and more widespread view that the western tradition of representative democracy is under threat and needs to be replaced by something better before it is replaced by something worse. Those who work in the non-political parts of government may like to think that that is not really their problem. But it is. 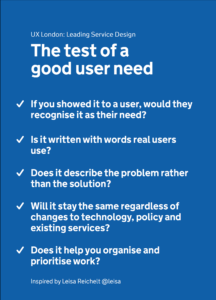 This is one to cut out and keep – two posters which are useful reminders of simple, but important, principles. Having recently seen some purported user needs which were anything but, a set of easily shared tests could be immensely valuable.

The second poster, on framing the problem, is also good though – reasonably enough for something produced for a service design conference – the framing suggested is very service focused. It’s a useful complement, though, to Lou Downe’s principles of good service design.

It’s always frustrating seeing the slides from a presentation without the voice which goes with them. Indeed it is a sign of a good presentation that the slides are pretty much incomprehensible without the spoken words they illustrate. That frustration applies to these slides too, but is worth it almost for the title slide alone:

There’s more to it than that, of course. But that framing of how to think about the role of government has important implications – most obviously on the weight placed on openness. There is no shortage of pundits describing the need for governments to be digital. Few of them think at all about how being digital (and being in a wider digital context) changes the nature of what government is. If openness is a necessary condition of being digital, digital is only the beginning of what will need to be different.